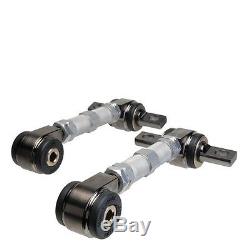 Skunk2s Rear Camber Kit for all 88-00 Civics and 90-01 Integras, including CRXs and del Sols, is based off of the same adjustable camber kit technology the companys been using on its own race cars for more than a decade. Skunk2s Rear Camber Kit is a must-have for enthusiasts looking to fine-tune their suspension or correct negative camber introduced from lowered ride heights. Each Skunk2 Rear Camber Kit is constructed of forged alloy steel, plated for exceptional corrosion resistance, and aircraft quality, 7075 aluminum. Each kit includes Skunk2s industry-leading, low-deflection polyurethane bushings that act as bearings to allow for smooth pivoting without the harsh side effects of spherical bearings. Unlike steel and rubber bushings found in lesser quality camber kits, Skunk2s polyurethane bushings wont tear or break free.

Skunk2s Camber Kits are the number one choice of many professional race teams , including Hondas own factory road race cars, since 1997. And since 1995, Skunk2 Racing has been leading the industry with its fully adjustable Camber Kits.

To accommodate enthusiasts needs, Skunk2 made a significant change in 1998 by adding an oversized, rectangular-shaped top mount to its Front Camber Kits for increased positive adjustment. In 2000, Skunk2 pioneered the use of one-piece forged ball joints. And in 2004, Skunk2 introduced its patent-pending Pro Series Ball Jointsa design that, today, sets the standard for all other camber kits. Quickly adjust rear camber without disconnecting the arm from the chassis.